Get a free quote

We'll be in touch with you within 24-hours to confirm your quote.

Kleenit > Blog > Preventing vandalism: how to stop graffiti on your property

Preventing vandalism: how to stop graffiti on your property

Graffiti can appear to be a random act of vandalism. However, there are a few things to know, and actions you can take, to reduce the likelihood of further tagging of your home, business or community.

According to the National Criminal Justice Reference Service, in general, vandalism may be motivated by malicious greed, the wish to draw attention to a particular condition, by a political ideology, by the desire for revenge on a particular person, by frustration, or by misguided playfulness. It could also be a territory-marking exercise by a criminal element, or simply juvenile boredom.

A factor in graffiti vandalism and many other crimes may indicate a lack of community connection, belonging, or sense of place. Those who are marginalised and perpetually moved along can begin to harbor resentment towards institutions and symbols of what they feel they are being denied.

‘Tagging’ is also a game to some younger people, albeit a destructive and irritating one. Participants are usually on a quest to ‘bomb up’ as many places with their scribbled mark, the more prominent or risky the better. Despite the cost to the public, private property owner or business, they continue for the thrill of rebelling, the adrenaline rush, and the sense of belonging — at least until they are caught and fined, or the novelty wears off.

It’s no surprise that damage (from vandalism such as graffiti) is more likely to occur in inner-city areas where individuals can act somewhat anonymously.

How do I prevent graffiti vandalism?

Taking into account the many reasons why a person may vandalise your property with graffiti, some steps can be taken to prevent it in the first place. The following uses the concept of Crime Prevention through Environmental Design, or CPTED:

There are also community actions that can have a positive impact on reducing graffiti in the area:

Can I DIY graffiti removal?

Graffiti removal often requires specialised tools to ensure that the surface below remains undamaged. Before attempting to remove any graffiti, be sure to document it by taking a photo for reporting it to Crimestoppers.

If the surface has been ‘tagged’ recently, it may be possible to remove it with a cloth and detergent; for example, Sugar Soap, taking necessary precautions to avoid further damage to the surface.

If that doesn’t work, it may be tempting to try to remove the graffiti oneself with specialty tools. However, professional graffiti removal offers a more reliable service with experts who have the time and experience to take care of the marks properly.

Where is graffiti vandalism most common?

A prominent location with low potential for witnesses at night is at higher risk of graffiti, but it can happen anywhere. Alleys and alcoves also provide cover for vandals to do even more damage. Such low visibility areas present a strong case for CCTV systems and other deterrents. 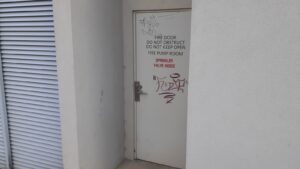 Rapid removal of graffiti helps in a few ways. According to Goodbye Graffiti, “rapid removal can counteract motivation for graffiti vandalism by limiting exposure time of the work and consequently, recognition from peers.”

Yes, graffiti often begets more graffiti. The longer one leaves the results of graffiti in place, the more likely it is that it will attract others to behave in similar vandalism. It suggests that the owner isn’t likely to act, that there is no security in place, and that graffiti will be likely to stay there long term. Other ‘writers’ may mark up the graffiti with different mediums such as permanent marker, paint or scratching, which can be challenging to remedy.

While paint can seem permanent, the sooner it is removed, the less likely it is that the colour will penetrate and stain the substrate. The same goes for stick-up glue & paper graffiti; act quickly by booking professional graffiti removal services.

Graffiti also has the effect of making an area look less than cared for, changing the perception of an area as one that may not be safe for residents, customers or staff. Negative messages may also reflect poorly on the business itself if they are not removed quickly.

It’s also worth reporting graffiti vandalism in your area to the relevant authorities, such as CrimeStoppers 1800 333 000, as well as to your local council. Some states have dedicated graffiti hotlines for reporting damage to public property.

Get the tagging done and guard against recurrence. Find out about anti-graffiti treatments, deterrents and graffiti removal services trusted by councils across Australia.

Get a free graffiti removal quote

We’ll be in touch with you within 24-hours to confirm your quote.